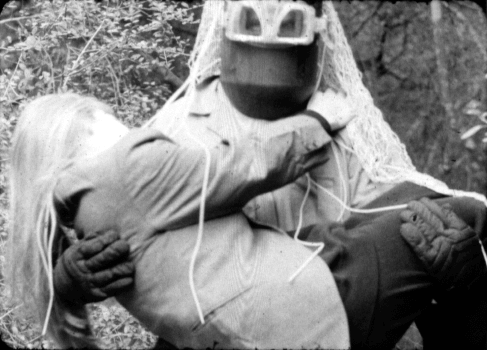 As mad as it seems, there is a second reference to Babylon Park in the 2007 book “The Small Screen: How Television Equips Us to Live in the Information Age” by Brian L. Ott, who I must now either consider an academic stalker or an awesome fan. It seems he refined his thesis from 2003’s postmodern intertextual allusions into the much more sexy “prosumption” of “hyperconscious television.”

Prosumption is not exclusively an interpretive activity, however. In some cases, viewers and fans literally produce their own cultural products to be consumed by other fans. As I have noted elsewhere, “Episode guides, character biographies, production schedules, fanzines, fiction, and artwork represent just a few of [fans’] varied products” (Ott 2003b: 227). These cultural products frequently reflect high production values and develop their own cult followings. The creators of “Babylon Park,” for instance, have transformed the principal characters on the syndicated series Babylon 5 (1992-7) into cartoons that appropriate the animation style and scatological humor of the characters on South Park. “Babylon Park” videos — “The ultimate crossover epic, blending the labyrinthine story lines of Babylon 5 and the limitless fart jokes of South Park” — are sold online for as much as $24.95. The apparent homology between hyperconscious television and fan art would suggest that fans are learning techniques of cultural production from the shows of this genre. The self-reflexivity of hyperconscious television operates as a sort of tutor for fans who want to produce their own art, be it images or fiction. In a landscape of semiotic excess, it is easy to feel overwhelmed by the endless bombardment of signs. In fostering a logic of prosumption, however, hyperconscious television collapses the distance and distinction between producer and consumer. The thunderous downpour of images and information that make consumption impossible is thus reinvented as a bottomless lake of resources for prosumption and for cultural production.

On a personal note, I already had an academic level of training in media production when I started Babylon Park. By the time Grudgematch was in the can, my team and I had all learned far more. We learned by doing and not by staring at the TV screen. Not to say the Mr. Ott is wrong in his assumption, there are countless “prosumption” projects from all aspects of media production you can find on the web. And some are even really damn good.

OK, you say, but what the fuck is “prosumption?” Mr. Ott’s central idea seems to be that unlike traditional shows whose plot is based a logical (or mostly logical) series of events in time, shows like The Simpsons and South Park have a loosely defined plot based on association. Or to try to put it even simpler, an episode of South Park has more in common with googling “anal cyst” and subsequently clicking through several web pages until you end up at “topless Martha Stewart” than your typical episode of “Castle.” And because of it’s non-linearity, the show challenges you (albeit rather crassly in some cases) to “get” the associations in a kind of meta-game of Trivial Pursuit. And because the show is causing you think about it, this may lead some to, at a low level, talk about the show on a forum or on Twitter, or to write fan faction, or produce their own works.

But you don’t have to take my word for it: